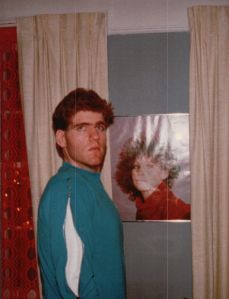 In a time when the world of posters belongs to the likes of Farrah Fawcett and the like, there lived a boy who asked, “Why?” A rather odd picture of Barbra, but the only poster the shops ever sold of her. I matched the window panels to her sweater for a Christmas theme.

Christmas 1983 was very exciting.  ‘Yentl’ was playing to packed houses in New York and around the country, it was my first Christmas in my first apartment, Mrs. Helmsley gave all her employees a free turkey – what could be better?

Well I couldn’t very well let a free turkey go to waste now, could I?  So, it was time to have another party – just a small gathering, nothing special, just some friends over to eat the bird and exchange gifts and put Christmas behind us so we could look forward to the highest of all Holy Days, Oscar Night.

I think I was concerned with how many people could I feed with a 10-12 pound bird, so either I didn’t invite a lot of people specifically, or they had other plans.  So it was just four of us – John, Jeffrey, Evelyn and me.

I don’t remember much about the dinner.  I know it wasn’t a full-out banquet like you’d have had home.  I don’t think I fully thought out everything that making a turkey dinner with all the trimmings would entail.  I don’t think I even had a proper carving knife.  I do remember being shocked to learn, after a frantic phone call to my mother, that I should have had the bird defrosting at least the day before.

Most likely trying to emulate an old Photoplay spread. This bird was real. 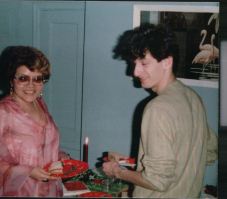 So, I didn’t know how to serve a complete turkey dinner with all the trimmings so I convinced everyone to think of it as “leftovers” and make sandwiches. 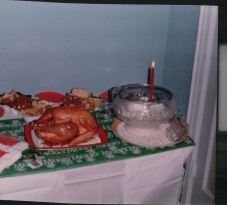 But who needed dumplings, when we had gifts!  Earlier in the month I picked up the phone and talked to some guy at MGM-UA and told him who I was (“Who are you?”), and that I had been to the ‘Yentl’ premiere and that I wanted to have a ‘Yentl’ Christmas Party and so on.  Anyway, either out of pity or because he couldn’t get security on the phone fast enough, he told me to stop by the next day, he was going to put together a package for me.  Really, well, thank you!I made my way into Manhattan and picked up the package.

The ‘Yentl’ press kit! Thank you nice guy who answered the phone! Thank you!

Posters, press kits, 8×10 stills, I couldn’t believe it.  I don’t think I even had to meet this guy; he just put the package together and left it with reception.  Didn’t you just love when you could get people on the phone and not these tacky answering machines?  I was in heaven.

I can’t remember if I brought the stuff back to Jackson Heights and had it framed locally or if I made my way over to a framing shop on 8th Avenue – anyway, I had I had the posters framed and planned to keep one and give the other to John.

But enough about the posters – let’s talk about the gown!  I spotted this gown at some church sidewalk sale on 37th Avenue and it reminded me of Barbra’s second act number from “A Happening in Central Park”.  Now, it wasn’t a replica or anything like that – but it had the essence and I bought it because I wanted it in my house.   Remember, this was before all this stuff was available for purchase on VHS tapes so we had to create our own “in-home” imagery.

I had planned to just hang the gown instead of putting up a tree, but John wouldn’t hear of attending a Yentl Christmas Dinner without having a tree, so off I went to Woolworth’s or some-such and bought a tree.  I had two-bedrooms in Jackson Heights and John was a frequent over night guest.  He arranged to stay the night before and put up the tree (while I was working the midnight shift).  I had forgotten to buy a tree topper so he made his own out of cardboard and tinfoil.  And seemingly I had also failed to buy paper towels, and John was a cleaner, everything wiped down and dusted.  And heaven forbid you put a drink town on a wood table without a coaster.

“I’ll have you know, Joseph Naughton, that I assembled and decorated that tree without one piece of paper toweling.”

Please note the John’s art project on top of the tree.

Another pose lifted from Joan Crawford. What of it?

I think Jeffrey is pointing out John’s homemade tree-topper.

So, now that I had a tree, what ever was I going to do with the gown?

Evelyn Perez, to her ever-lasting credit, graciously donned this gay apparel and modeled it for us, with Barbra singing “Silent Night” on the record player.  Who says we don’t know how to entertain ourselves?

And the gifts were a huge success.  I had hung my poster as a sort of centerpiece for a Barbra alter – it was Christmas after all – and couldn’t wait for John to open his.  Needless to say he was ecstatic.  His reaction was worth it, all captured by Kodak.

Evelyn anxiously awaits for John to open his gift from her. 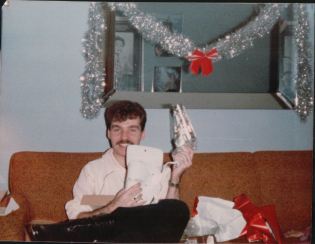 John received a shotgun blow drier from Evelyn. And he loved it.

Nothing was done that wasn’t a photo opportunity. Metro taught us well. 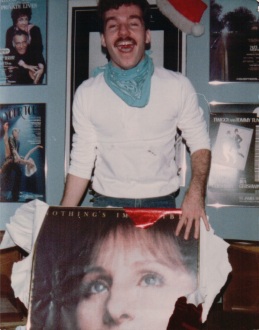 Well, this was a success. Even if he had to take it all the way home to the Bronx on the subway. 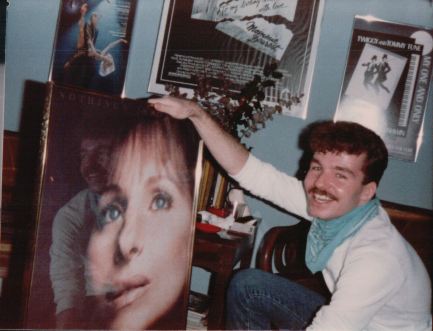 He loved it. When the pictures came back from the drug store John pointed out that he was mirror imaged in the glass of the poster as if he entered the film with Barbra. All very mystical at the time, no doubt.

John gave me a Marilyn Monroe doll.   I’m not sure why, he was the one who liked Marilyn Monroe, not me.  Maybe he wanted it for himself?  Kodak, as well, captured my reaction. 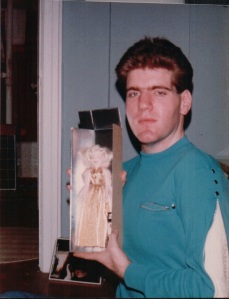 That’s the last time I forgot to buy paper toweling. 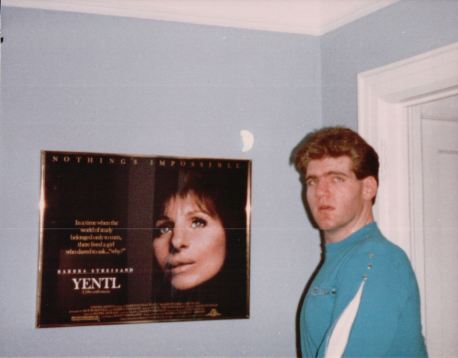 What can I say? When we had to pay to have each picture we took developed we only got on shot. 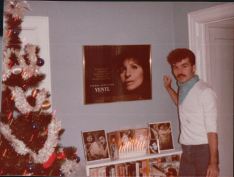 John at the ‘Yentl’ alter. Very Radio City, no? 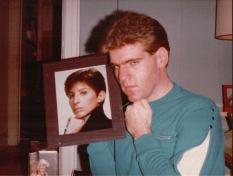 This was one of the pics in the press kit from MGM/UA. I think I told John that for Christmas all he had to do was buy me a nice frame. 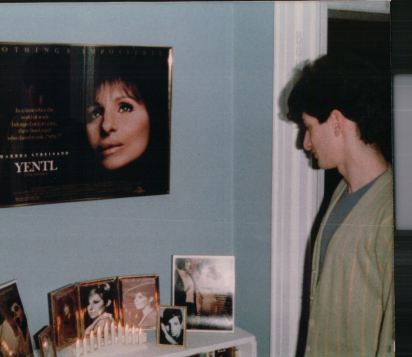 Jeffrey, not a celebrant of the holiday per se, was still able to enjoy the Yentl alter. 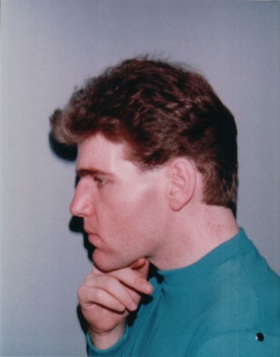 I was very conscious of my neck but John wanted a picture of the hair-cut. So I gave myself a mini-lift, at the age of 23.